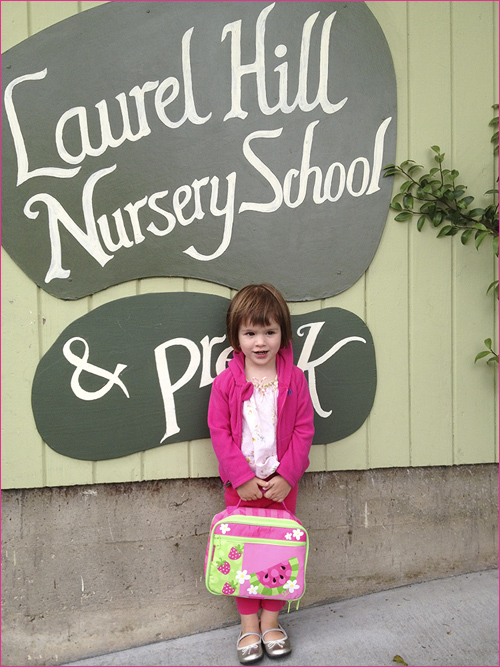 Today was Lucy’s first day at Laurel Hill. It went really well. Honestly, we didn’t have any doubts. Well, maybe, one, about how we chose to send her for afternoons (1 to 4, M-F) and what will happen to her nap. Today the nap happened in the car on the way home, which was fine. But I need to back up!

I’d forgotten about how many little rituals and details that come with Laurel Hill, and how Lucy doesn’t know any of it yet. How potentially overwhelming! For example, where to put your stuff, when to go where, where you can / can’t go, whether you need shoes, or need to remove you shoes (dome/playhouse). “Group meeting time” will come to mean something to Lucy, but today I think it all whizzed by in a flash.

She met Kaile (pronounced Ki-lee), who is sort of like her homeroom teacher. Her cubby is in Yellow room, and Kaile is the yellow room teacher in the afternoons. But she also got to meet Sally, Inga (♥), Ann, Maria, Collette, etc! They are all Sooooo nice. Off the charts nice. Like, nicer than I could ever be on my best day. It’s good to be a kid at Laurel Hill.

I was wondering how the first little bit of playtime would go, and what Lucy would do. There is a lot of choice. So much to discover. I don’t know if it was fate that caught her eye, or if she searched them out, but just as I was re-hanging a fallen jacket, Lucy shouts out, and hold up her arms in display: Scissors!!!

She has been proclaiming all summer that she would “use scissors at Laurel Hill”. A mantra that she made up for herself? I’ve enforced a no-scissors rule at home, but we all encouraged the scissors plan for Laurel Hill. It was Fun to see her jam over to the scissors table, and start practicing. She owned it for a good 15 minutes. 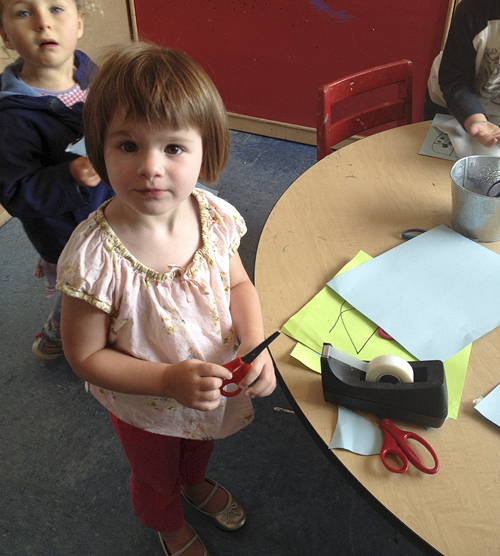 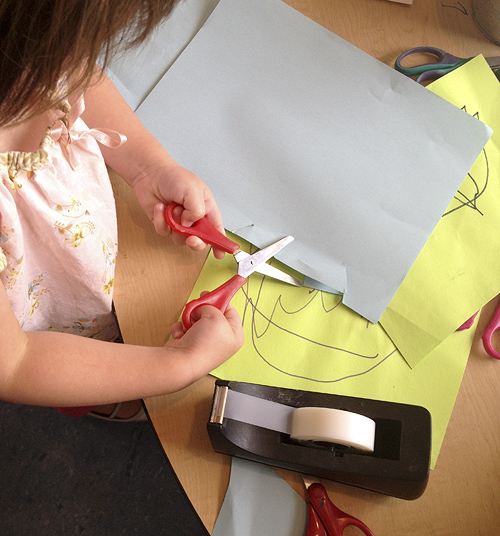 (Photo taking isn’t really encouraged, so I wasn’t allowed to go into full paparazzi mode. My shots suffer a bit from being on the DL)

What else. She played with some farm toys, she used the potties, she played in the sand, we read books. She really liked Yellow room’s playhouse. They have a play kitchen, dolls, dress-up, and a great ladder to more space up high. Lucy put on a cape. A sassy little girl told her That’s Not how you wear it. Lucy’s eyes got wide. My eyes got wide. I didn’t know what to say. I think I ended up saying, “That wasn’t a very nice thing to say”. The moment passed. Lucy made no effort to adjust the cape. 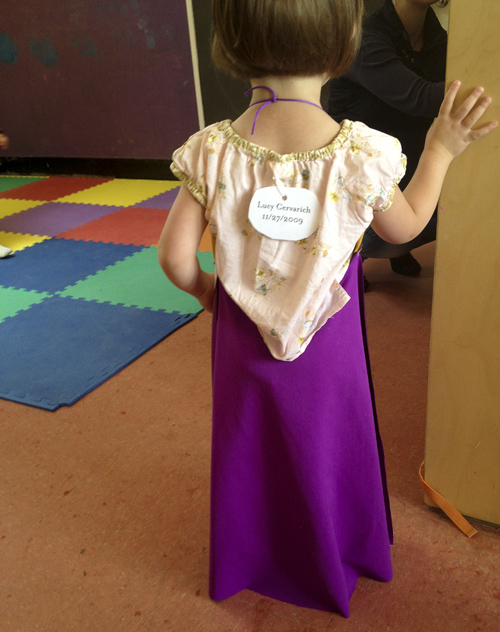 At a certain point my job was to work in the kitchen. I leaned in to Lucy’s ear as she was playing and I said, “I gotta leave for a bit”. She kept playing.
Ta-da!

At the end of the day Lucy was tired. She yawned really big at group meeting time. But no melt downs, and she even VOLUNTEERED, to Kaile, to sing a song. Twinkle Twinkle Little Star (I suppose that’s the one that’s in her wheelhouse.) We were all sitting on the rug together. I mean, it wasn’t a case of ‘who knows twinkle twinkle’, – it was Lucy saying, “I can sing a song”, and Kaile saying, what song would you like to sing? I was super proud.

More photos after the jump… 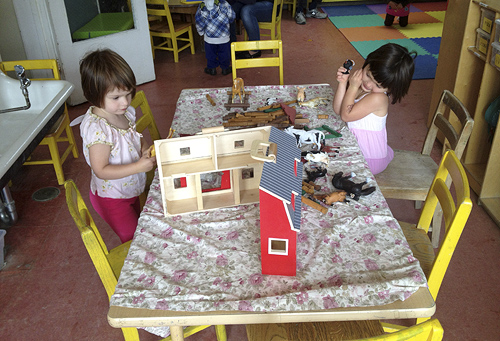 Lucy and Ivy playing with horses 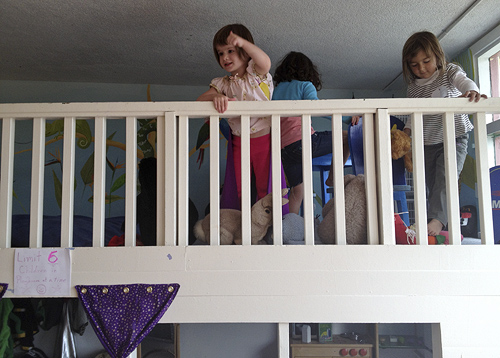 Upstairs in the playhouse 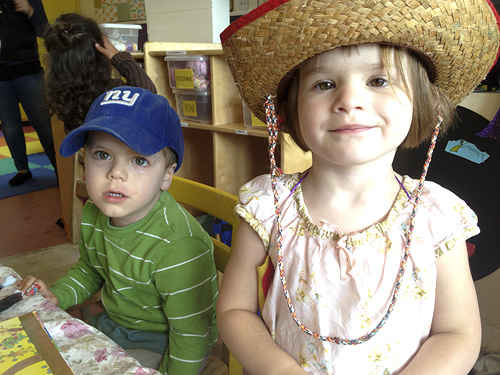 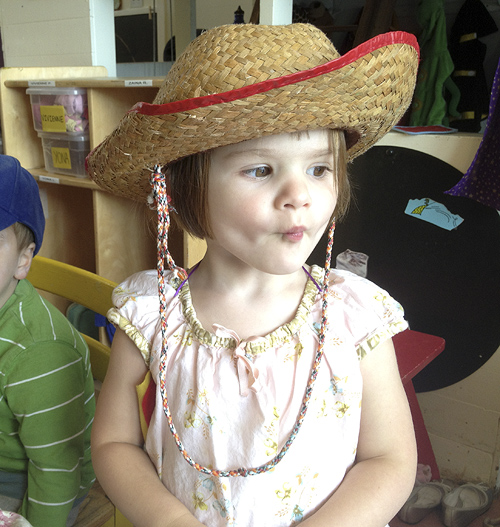 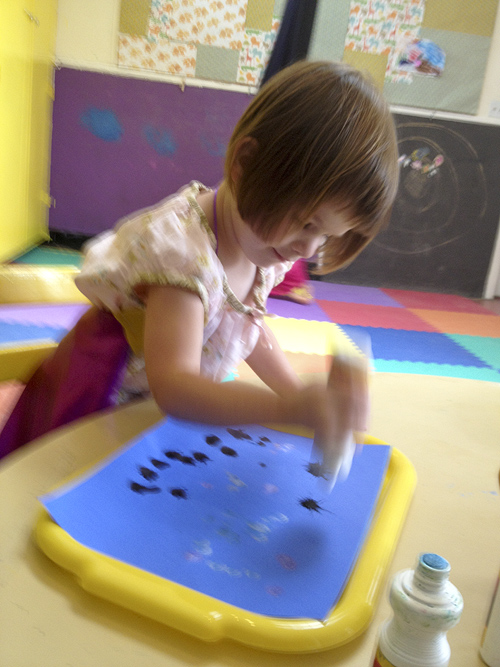 Messy art, for Not my house :) 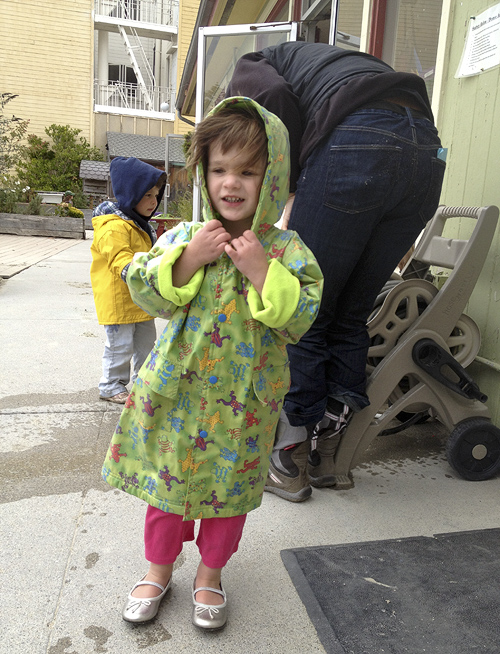 It’s as cold as Clarendon! 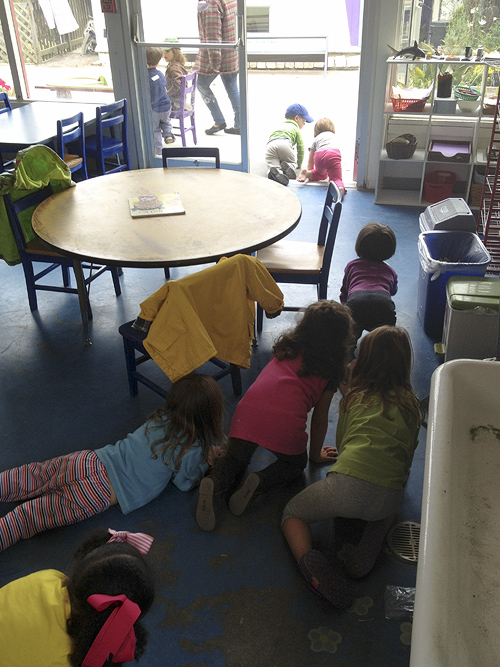 They were being snakes.

Tomorrow I don’t stay with her, I just get her settled, then go. Yee Haw!!

11 responses to “Lucy at Laurel Hill”