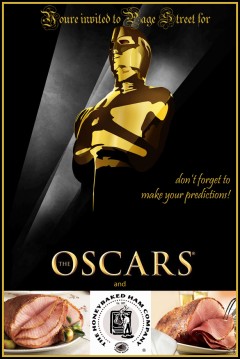 (Our Homemade Invitation for our family Oscar Party (a.k.a. Academy Awards and dinner)

Mark got a screamin’ deal on the Honey Baked Ham, because he is very good at that kind of thing. Nanu brought homemade Mac-n-Cheese, and Madie and Alex brought “Bomb Salad”, as in, ‘it’s the bomb’ (it was).
We realized Kiera wasn’t going to be able to join us . She was busy in NY!

Oscar had a idea for a cake topper he wanted to do. Nanu was making tiramisu, which turned out boozey and delicious. However I still needed a cake that Oscar could “top”. Normally Kiera would be all over that bad boy, but instead, I would just try to make something serviceable. My shortcut: Yellow cake from a box.

All of which gave me a realization: I am officially a cake snob. So spoiled by SK these days, I was not hungry for this faux cake! It’s just not yummy enough {sniff!}. Good thing for Nanu and the tiramisu!

Our frosting was lemon butter cream (no I will not stoop to frosting from a can). This came out a little too strongly lemon because I cavalierly threw in a ton of lemon zest with no measurement whatsoever. But the cake toppers were fun! Before we cut the cake, Oscar ceremoniously bowed the swan’s head into the frosting, and the king reined supreme.

Everyone filled out their ballots before the show. Some tried hard, some, not so much. Some convinced others to vote one way, and then changed back without saying! We circled our correct guesses as the show went on. In the end it was a close race for victory, which Alex clinched by predicting Best Director: The King’s Speech (Tom Hooper). We had fun -I hope to always watch the awards this way! Congrats to The King’s Speech for Best Picture as well! 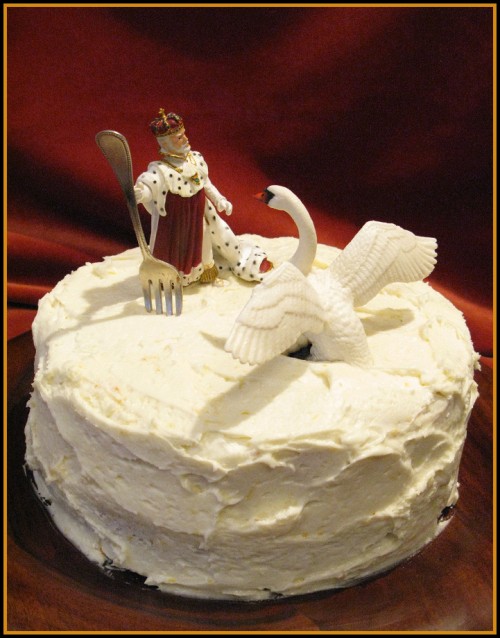 Photo by Cole, with the point’n’shoot.

2 responses to “Oscar’s Cake For The Oscars”