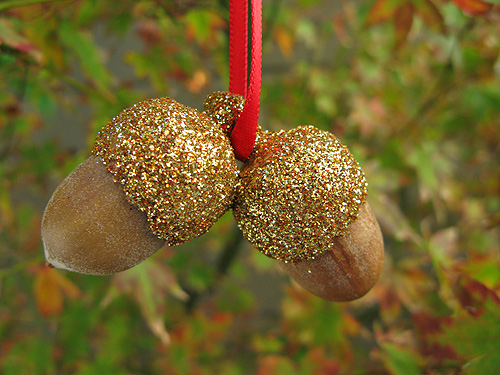 Oscar and I made Christmas ornaments from acorns that we found this fall at Camp Okizu.
We also purchased some little wood star shapes at the Hobby Co, and a couple of mini white pumpkins at the market down the street. 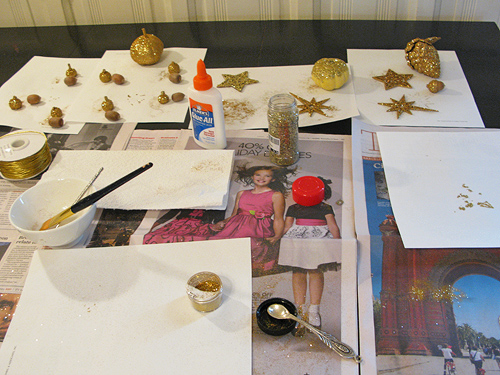 The big black table is still up in the living room from Lucy’s birthday party. I love having a space to do projects, wrap presents and generally spread out. For now, the table is here to stay!
Here is a snap of the glittered items drying. The glitter got everywhere! 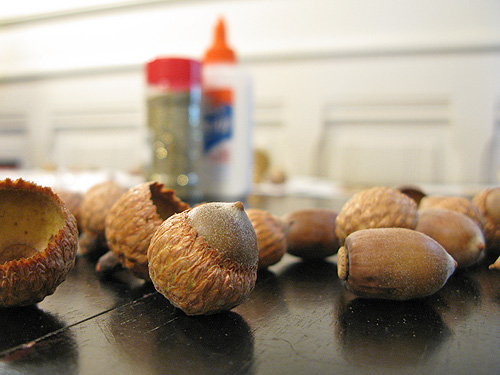 The tops naturally came off a lot of the acorns. That made it convenient to glitter the tops seperately, and not get the bottom part of the acorn messy.

The idea to make the acorns was heavily inspired by these acorns on Etsy: 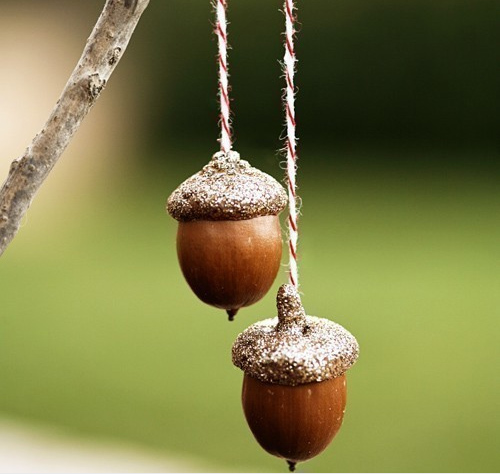 So, we painted glue, sprinkled glitter, and drilled little holes for the ribbon. 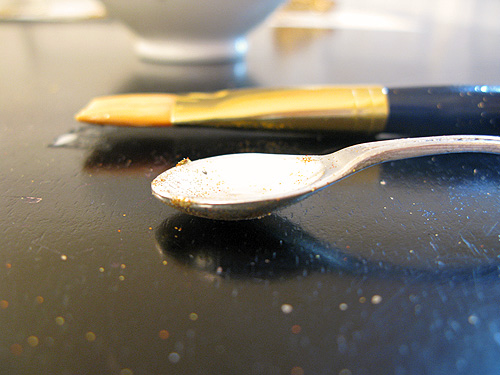 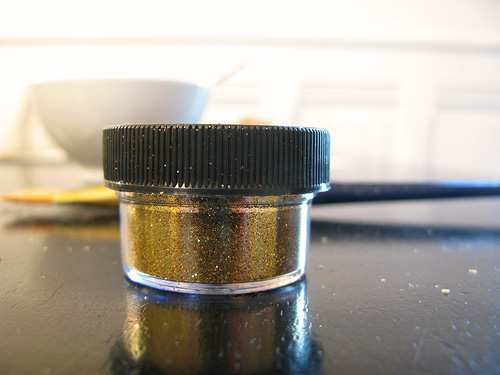 Soon, we had pretty little ornaments. 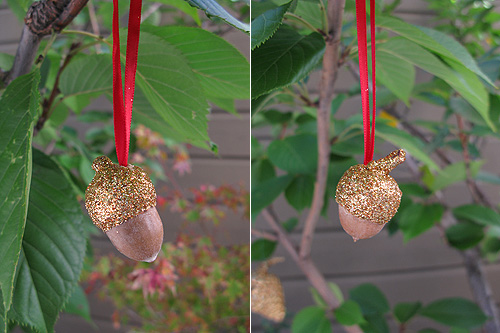 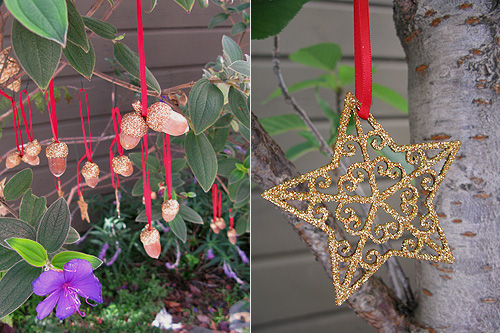 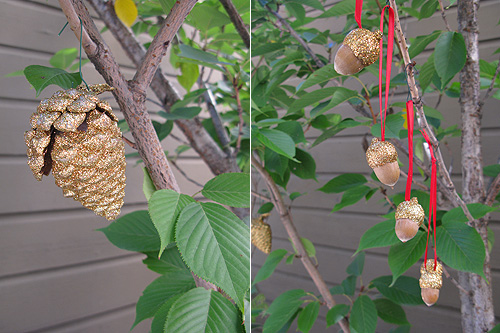 Ps. Oscar wants me to add the following story. We picked the pinecone off of a tree growing near Oscar’s school. We were walking back to the car, after school, and I found one I could reach. He was delighted and mildly alarmed to discover an inchworm living in the pinecone! After about 45 seconds he decided he didn’t want the native inhabitant anymore. I told him I didn’t want it, plus I was driving. The solution was to put the little bug out the window. “Did you put it out?” I asked. “Yeah. I think so.”
(the end)

Bring on the Holidays! 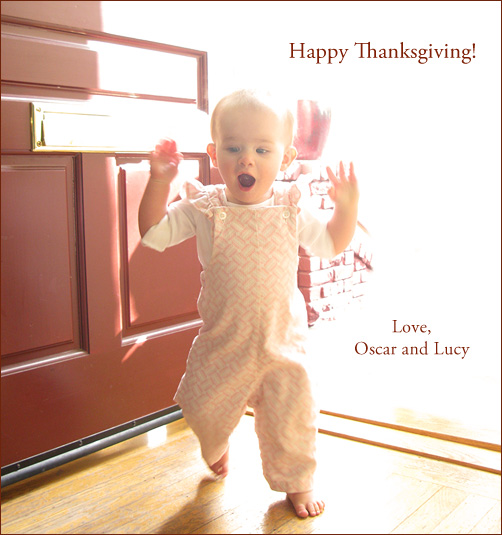 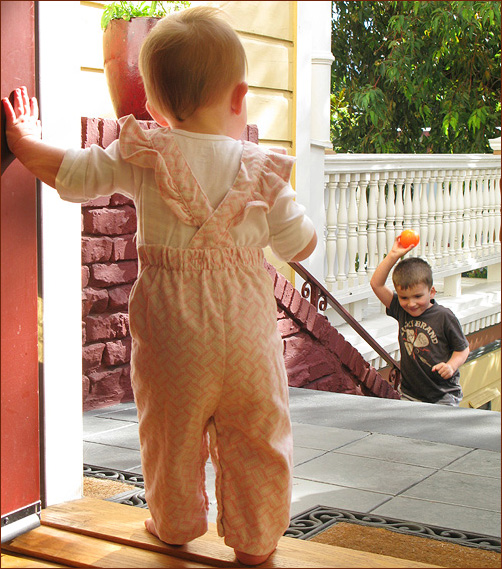 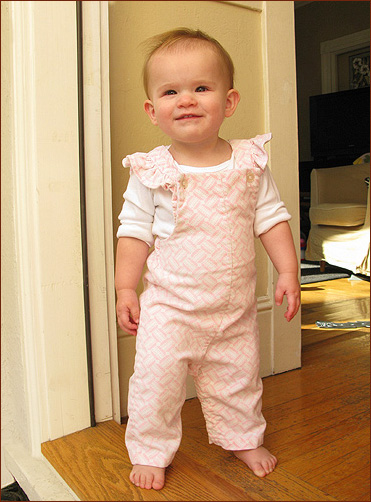 Thanks to Cecca and Harriet for the overalls- they were made by Cecca’s grandmother Gaga, circa 1975 for Cecca, and they kept them all these years!

Officially, I heard Lucy say “Mama” to me a couple of months ago. She was looking at me as I walked into her room. “Mama!” So I suppose that counts as her first word. Then she pretty much forgot how to say it. For a good long while. Now she says it again, although lots of times she says “Dada”, to which Oscar howls, “No! That’s Mama!”.

However, all of that is not nearly as interesting as her first Words – the collection she has so far.

My favorite was two days ago. I walked in to get her up from her morning nap and she said, in her most normal speaking voice, “Hi Baby!”. Ugh. so cute. She says “Baby” really well. She calls her doll “baby”, and pictures or photos of babies too. She loves her doll baby!

Without a doubt, she knows Georgia by name. We have many witnesses. So that is really cute, because Georgia is her best friend and playmate. Georgia is a 6 month old French Bulldog who lives next door. I swear if it got any sweeter we’d all be choking on sugar cubes.

Lucy can also say “Dada”, and let it be Known that the love for Daddy is strong. Daddy’s Little Girl is not an abstract idea around here. Her love for “Dada” is a force to be reckoned with.

It may sound funny, but Lucy has a name for her blankie: “Mimi”. She made it up. She loves it. We’re going with it.

“Doggie” has been said on more than a few occasions. Since it’s so early, talking wise, I can’t get her to say it on request. But it’s in there. The weird thing is that we don’t call Booker doggie so I don’t know where she is getting it.

There are a few other words floating around. They’re on the periphery, and I’m not sure when they’ll be cemented. In no particular order:
“Up” (as in pick me up)
“Num” (food)
“De” when she sees herself in the mirror, or it could mean “that”.
“Nigh” for Night Night
“shhhhh” when she picks up a toy airplane and files it.
She also has the breathing sound that refers to Booker and Hoot, which is a little girl version of panting, and she’ll happily do that on request.

Though she can’t say it, she knows exactly what I mean when I tell her to sit down.
click to enlarge 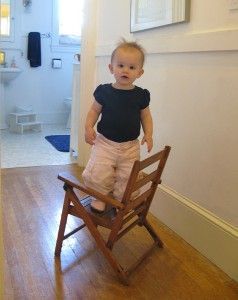 Oscar has successfully grown a plant from a seed.
The kindergartners did them together (apparently Dillon’s didn’t grow – Oscar has mentioned it 3 times).
Anyways he loves his plant and is very proud. I haven’t a clue what kind of plant it is. The seed was bean shaped and humongous to start with. I figure they picked something akin to a weed so that it would be easy to grow. 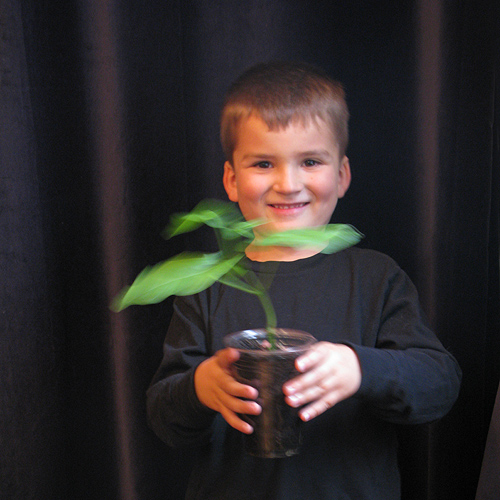 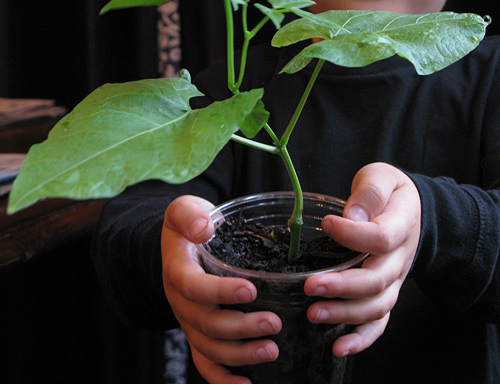 We have enjoyed a nice Indian summer this year. The weather report said rain was coming, though, so yesterday I went out and raked the leaves. The garden is pretty much abandoned, but raking falls under the category of mandatory minimum upkeep (a.k.a. You gotta at least do this or you suck.).
Magically, there were some little blooms quietly doing their thing back there. Like the name of the salad at NOPA, Little Gems.
As I write this post tonight, we’re having thunder and lightning. My heart goes out to all these sweet little gems, freezing. At least they can enjoy immortality on Oscar & Lucy’s blog. Hello Winter. 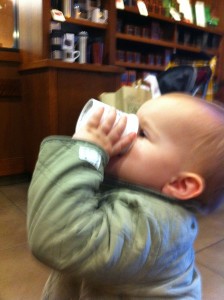