I just got back from dropping off Lucy. No trouble at all. I said, “Ok, see you at gate time”. She started to head outside to play – and we both saw the same thing at the same time: naked kids playing in the sun and sand.

I asked quickly, as she was walking away from me, “Do you wanna take your shoes off, so you don’t get sand in them?”

She turns and says, ‘Mommy I want to take all my clothes off”.

I had to take this photo. She really didn’t want to delay, but she dutifully posed for it. Which I took as fast as I could. I didn’t want anyone to think I was the next Sally Mann.

And one more: A spy pic… 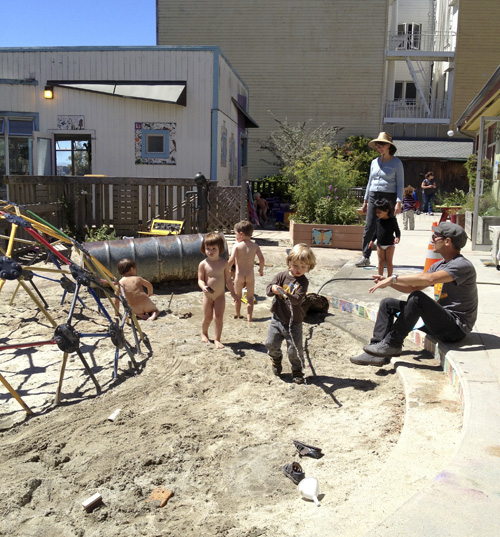 Laurel Hill has some awesome play-based philosophies. One of them is that the Play comes first. We wouldn’t want the constructs of wet clothing to stand in the way. Anyways, Laurel Hill has a great reputation around the city as promoting clothes-free play. I mean we’re known as the naked preschool.

I don’t think Oscar was EVER inclined, during his 2 years. It took Lucy less than 5 days to try it out.