Oscar could not stop talking about his planned sleepover. This was the item on the Mollard Family Visit agenda he wanted the most. He’d confirm what day was it was, who would be there, how I would come and get him in the morning. Grandma Bobbie’s is the dream date of sleepovers. What’s not to love: cozy, friendly, and everything a boy could want, in abundance. (food, video games etc.)
The inside scoop is that it was storming pretty fiercely that night. The house is big and old – the kind that makes noises in the night when the winds blow. Before bed Kristi checked in on them: Sam and Cole were already asleep (the moment their heads hit the pillows). Oscar’s eyes were the size of saucers. She said he looked resigned – this is what he’d been asking for, and here was the moment. Kristi decided to spare him the next hour of lying there wide awake. She offered Oscar a spot next to her bed, across the hall. He accepted quickly. She re-set him up, and then his head hit the pillow, and he was out too.

Reports of a large breakfast and rumors of 20 pancakes eaten the next morning.
Here’s the snap I took when I said good night. 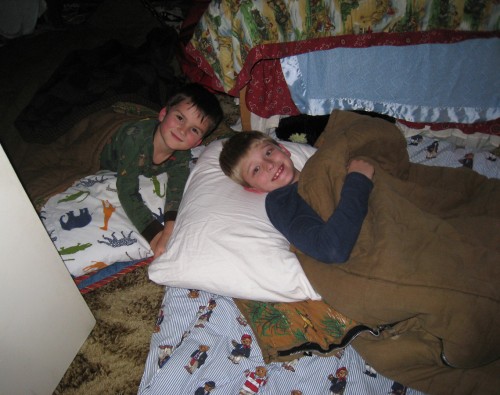 One Response to “Oscar’s First Sleepover”